Asbestos is a naturally-occurring mineral that has a unique, fibrous structure. There are several types of asbestos. Asbestos is popular in building materials because it is strong, won't burn, and is a good insulator against heat and noise.

How Can Asbestos Affect My Health?

The mere presence of asbestos in a building is not hazardous. The danger is that asbestos materials may become damaged over time in a way that releases asbestos fibers into the air. These fibers then can be inhaled into the lungs. The fibers that are most dangerous are the ones that are too small to be seen by the naked eye and too light to "settle out" of the air quickly. Asbestos-containing material that would crumble easily if handled ("friable" or "non-intact"), or that has been sawed, scraped, or sanded into a powder, is more likely to create a health hazard.

From studies of people who were exposed to high levels of asbestos fibers for many years in factories and shipyards, we know that breathing high levels of asbestos fibers can lead to an increased risk of asbestosis (a gradual scarring of the lungs that eventually impairs lung function), lung cancer, and mesothelioma (a very rare cancer of the linings of the chest or abdominal cavity). The symptoms of these diseases do not usually appear until about 20 to 30 years after the first exposure to asbestos. Most people exposed to small amounts of asbestos, as we all are in our daily lives, do not develop these health problems.

How Do You Identify Materials That Contain Asbestos?

You can't tell whether a material contains asbestos simply by looking at it, unless it is labeled as containing asbestos. To know for sure, samples of the material must be checked under a special microscope by trained technicians.

However, certain types of material so commonly contain asbestos that by law, we assume they contain asbestos. These materials are called "Presumed Asbestos-Containing Materials," or PACM for short.

These PACM materials are:

Can Buildings Built after 1981 Have Asbestos in Them?

Yes. There are still many asbestos-containing building materials and other products (such as automobile brake linings) being used in the United States. The U.S. Environmental Protection Agency instituted a ban some years ago, but it was later challenged in court and EPA was forced to withdraw it. The only items still banned are thermal system insulation, sprayed- or troweled-on surfacing, and new uses of asbestos. So, asbestos is still fairly common in building products. If the product is made in the U.S., it is supposed to have a warning label. However, many products sold in the U.S. are actually made outside the U.S., so they may not contain these warning labels.

Is There Asbestos in My Building?

The University has identified the known and presumed asbestos-containing building materials in University-owned buildings constructed before 1981. NC OSHA does not require employers to look for asbestos in buildings constructed after 1981. EPA, however, requires such buildings to be fully inspected, including lab analyses for every possible type of asbestos, before demolition work.

In most academic buildings, only materials that are inside the building and which meet NC OSHA's definition of "PACM" are listed. Thus there could be less-common forms of asbestos in the building, which are not listed. Only areas that could be seen during a walk-through are listed, so there may be hidden asbestos behind walls, on roofs, on old wiring insulation, or in other inaccessible places.

In most residence halls operated by Housing and Residence Life, all materials that are inside the building and could contain asbestos are listed. Lab testing to confirm whether the materials contain asbestos was done following EPA guidelines. Only areas that could be accessed are listed, so there may be hidden asbestos behind walls, on roofs, on old wiring insulation, or in other inaccessible places.

Contact the Industrial Hygiene Manager or call 828-262-4008 to see the surveys of known and presumed asbestos materials in each building built after 1981.

To understand the asbestos surveys, you may need to know the following terms:

What Should I Do About Asbestos in My Building?

Leave it alone. Asbestos-containing materials are not a hazard unless they are damaged to the point of creating dust or fibers. For example, do not hang plants from steam pipes or from drop-ceiling grids above which there is sprayed-on fireproofing. Do not drive nails into plaster walls.

What Should I Do if I Think There is Unidentified Asbestos-Containing Material in My Building?

At this time, the University is in the process of developing a comprehensive asbestos management program. In the meantime, contact the Industrial Hygiene Manager if you have a concern about asbestos in your building.

What Should I Do if I Discover Damaged Asbestos-Containing Material in My Building?

Leave it alone and notify your Housekeeper or the Industrial Hygiene Manager. Do not attempt to repair it yourself. Do not sweep, vacuum, or otherwise disturb any debris that may have come from the damaged material. All App State Housekeeping staff have been trained in recognizing asbestos-containing materials and the process for requesting repair of damaged materials.

How Can I Find Out More?

There are many documents available from OSHA, EPA, and NIOSH. Just search for "asbestos." (Note: the regulations for working on asbestos-containing materials changed significantly in 1995 so documents published before that date may have incorrect references to OSHA programs.). 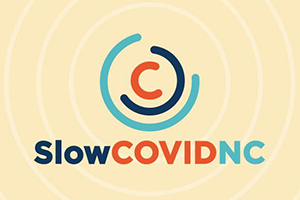 Anonymously share a positive COVID-19 result or receive a notification if you have been in close contact with someone who tested positive for COVID-19 in the past 14 days. Your privacy is protected. Download and install the SlowCOVIDNC mobile app for free from the App Store or Google Play.